Knock your opponent out of his tower with tactical keyboard use.

To Conquer A Girl by Olle & Roger

You are what you eat

2D platformer where you roll on bowling pins

Knighting Jedi with a lightsaber is dangerous business and it’s up to you as Jedi Master to carry out the procedure as painlessly as possible. Steady your shaky old hands and watch out for influences from the Dark Side!

You gotta get those cows!

Trading is not that usefull by Lau Korsgaard, Jakob Eklund (Board game, no download)

The game where the boot country finally kicks some ass.

You strip and drink

A facility. That has barrels.

Here is a preliminary schedule for the presentations. Please tell us if something needs to be changed or is left out.

There’s less than 48 hours to go until the 2011 edition of No More Sweden starts. You can feel the excitement in the air.

I figured I’d post this as a small reminder, any and all information you need is on the NMS2011 page. This includes a brand new schedule and also the address of the venue.

See you all soon!

As far as I can tell this will be the biggest NMS yet. 47 attendees had signed up by the time I made this list. Should you consider yourself signed up and happen not to be in this list, contact us and we’ll fix you right up. 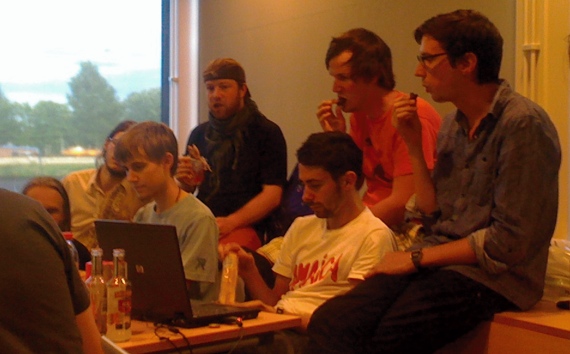 Just like last year we are going to have a session where people give talks and present the things they are working on. This will almost certainly happen on Friday, the first day of the event.

To not take up to much time we are going to limit each presentation to about 5 minutes. If you have a longer talk that you’d like to give we can probably work that out too – just make sure to tell us.

Erik Svedäng is responsible for the scheduling of this session so if you’re interested in participating you should email him ASAP at erik.svedang@gmail.com.  Include a fancy name for your talk and a brief description of what it’s about.

We’d like to see that as many people as possible give a presentation! Anything indie games-related goes. Here are some suggestions:

… or something completely different. Hope to hear from you soon!

We’re already at a rather impressive 30 participants so the decision has been made to close sign ups at midnight tomorrow (Tuesday). So, if you haven’t signed up already, do it now!

We’re happy to announce that we’ve secured a venue for No More Sweden 2011 edition. This time around we’ll be in the beautiful city of Stockholm.

We’re also doing that social network thing, you can find all your fellow gamejammers on the Facebook group/page or whatever it is. And Twitter is likely the best channel for up to the minute news about what’s happening.